Kurukshetra is translated from Sanskrit as ‘field of the Kurus’.  Kuru was the name of a Vedic Indo-Aryan tribal union and the founder of the Kuru dynasty.  Kuru was a descendant of the legendary emperor Bharata.  Today Bharata is an official name of the Republic of India.

Other than these Kurus of India, there was another kingdom called Uttara Kurus to the north of Himalayas.  See Uttara Kurus in Russia.

The Kurukshetra War described in the great Indian epic Mahabharata was the conflict evolved from a dynastic succession struggle between two groups of cousins, the Kauravas and the Pandavas, for the throne of kingdom called Kuru.  All were the descendants of the above mentioned legendary king Kuru.  Kurukshetra was also known 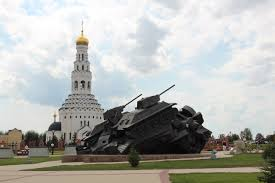 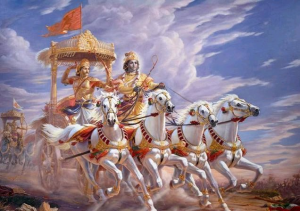 as the ‘field of Dharma’ or field of righteousness.  The Bhagavad Gita (Sanskrit: ‘Song of the Lord’) was preached by Krishna before this war started.  It is one of the most respected religious and philosophical texts in the Hindu religion.

The Battle of Kursk was the pivotal encounter of the Second World War.  It took place during July and August 1943 near Kursk, 450 km. south-west of Moscow and led to the largest armoured clash in the history of humankind.

The correlation in the history of the battles on the Kuru field and on the Kursk field: 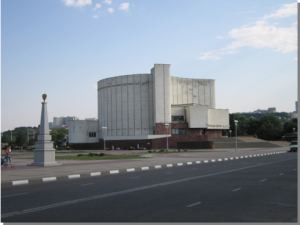 The Battle of the Kuru field (Kurukshetra) began on August 5, 3102 BC. On August 5, 1943, the Soviet troops liberated Russian cities Belgorod and Orel.  The first salute in the history of the Soviet Union was dedicated to this significant event.  Literally, Belgorod means White City or Heavenly Jerusalem.  Orel is the Russian name of eagle that is ‘king of the skies’, messenger of the highest gods, symbol of power and immortality (higher consciousness).

Another version states that the Great Mogul Diamond was the stone from which the Koh-i-noor was cut.

The name Koh-i-noor is derived from the Persian language which means ‘Mountain of Light’.  It is said that the Koh-i-noor was mounted on the Peacock Throne of the Mughal Emperors of India.  In the middle of 19th century the Koh-i-noor was given to Queen Victoria after the British conquest of the Punjab.  Today, the Koh-i-noor is the largest diamond set in the Queen Mother’s Crown that is a part of the Crown Jewels of the United Kingdom.  India wants it back as it is part of the glorious national heritage.

It is believed in India that soon after the battle of Kuruksetra (Kuru field), the Kali Yuga or darkest age began.  After it should come the Satya Yuga or the Golden Age often associated with the Age of Aquarius.

There is information that on the day of the end of Battle of Kurks (August 23, 1943) ten brahmanas of the highest stage of initiation came to Nicholas Roerich, who lived and worked with his family in India at that time.  They said that on this day Kali Yuga ended and started Satya Yuga, the time of the domination of the Cosmic Law.

On the northern part of the Kursk Arc (or field), in the Orel region, there is the source of the Russian river Oka.  See Oka & Gujarat.  The Oka River is a tributary of the Volga River.  In the basins of the Oka and Volga rivers there are many smaller rivers that have the same name as the holy rivers described in the Mahabharata.

In the ‘Book of the Forest’ that is one of the longest books of Mahabharata, sage Narada visits the Pandava brothers and provides a list of holy sites and places that they are recommended to visit.  See Narada in the Urals.

Pehowa is one of the oldest and most sacred places of the Kurukshetra region in the Indian state of Haryana.  Indian name Pehowa correlates to the Russian name Pehorka (Pehora).