Narada and the Urals 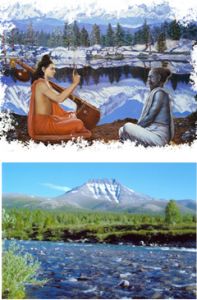 Narada is the Vedic sage who carries enlightening wisdom and travels to distant worlds and realms of the Universe.  Narada is considered the greatest of sages.  According to the Indian epic, Narada lived in the north.

The highest point of the Ural Mountains is the Mount Narodnaya also known as Naroda and Narada.  Its name is associated with Narada (Naroda) River at the foothills and the above mentioned sage Narada from early Hindu texts. 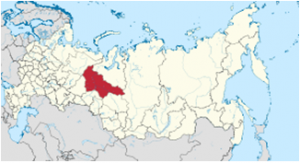 Mount Narodnaya (Narada) is located in the region called Yugra.  The region has great economic importance.  The majority (>51%) of the oil produced in Russia comes from Yugra.  See about the Russian rivers Ugra and Siva.  The major Yugra’s oil producing cities are located on the same meridian with major Indian cities.

The Urals run from the Arctic Ocean to Central Asia (northwestern Kazakhstan).  The mountain range forms part of the conventional boundary between the continents of Europe and Asia.  The Urals still have one time zone with India.

Name Narada often is literally translated from Sanskrit as ‘the lowest of people’ (nara — man, da-inferior).  But it could not be true taken his high status.  Narada was son and disciple of Brahma (the creator god in the Trimurti of Hinduism).  On the other hand, the source of a river is called the upper stream, the whereas mouth of a river is referred to as the downstream.  Mount Narodnaya (Narada) is 400 km. from the Arctic Ocean.  The total length of the Urals exceeds 2500 km. 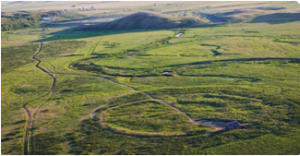 In the Southern Ural steppe there is archaeological site Arkaim that was a very important center of the Aryans (their self-designation meaning ‘noble’) or Indo-Iranian people (modern linguistic name) who later moved to India and Iran to form there the Vedic and Avestan cultures.  That is why Vedic Sanskrit and Gathic Avestan are remarkably similar, descended from the common Aryan (Proto–Indo-Iranian, Proto-Indo-European) language.

Russian, Hindustani (Hindi and Urdu), Bengali, Punjabi, German, French, Marathi, Spanish, English, etc. are the daughter languages of that ancient common language.  It is the most widely spoken language family in the world.  Aryavarta (Sanskrit, lit. ‘abode of the excellent ones’, i.e. the Aryans) is the region where the historic Aryans used to live.  Scholars point out that, even in ancient times, the idea of being an ‘Aryan’ was religious, cultural and linguistic, not racial.

In Avestan cosmogony, Hara Berezaiti is the legendary mountain surrounded by the steppes of the Airyanem Vaejah (the homeland of the early Iranians, i.e. Aryans).  See villages Harino and Berezovka in the Northern Range of Vologda region.

The youthful sage Narada summarizes the Ramayana to Valmiki.  Narada tells him in brief the story of prince Rama, his wife Sita and the king of Lanka Ravana (Rakshasa).  See about Russian rivers Ra (Volga), Sit and Ravan.

Narada is the teacher of Vyasa who is generally considered the author of the Mahabharata and the scribe of both the Vedas and Puranas.  Vyasa was the ancestor of two warring clans in the Mahabharata — the Kauravas and the Pandavas.  See Kursk battle.

It is believed that Vyasa was born in Kalpi located on the bank of the Yamuna River.  Kalpi is said to have been founded by King Vasudeva.  The witty Birbal of Akbar’s The Great court is considered to be born near this city.  Kolpino is a part of Saint Petersburg.  Kolpino is located on the Izhora River (a tributary of Neva River).  Kolpino is believed to be descended from an old Russian word for a swan.  In Russian and Hindu traditions, swan is also a symbolism for spiritual perfection.  The last two letters (‘no’) in the name Kolpino indicate the city status and are added to the ancient root ‘Kolpi‘ that is alike to Kalpi.

Narada gave spiritual initiation to Prahlada.  He was taught by Narada in early childhood.  Prahlada got to hear Narada’s chants while being in his mother’s womb.  See Prahlada in Russia.