Prahlada is the Sanskrit name of a great devotee of Vishnu and the most powerful king of the Asuras.  See village Osurovo in Yaroslavl region of Russia.  This settlement is located 160 km. from Moscow whose region itself has many Sanskrit names.  See Sanskrit names in Moscow region.

Prahlada is a typical Russian word meaning cool, cold, etc.  Such weather stays in Russia most of the time, particularly in Siberia and the Urals. 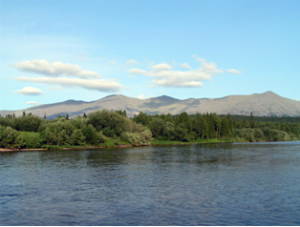 As it is said above, Prahlada was devoted towards Hindu god Vishnu.  In the Urals there is Vishera River.  Vishera River is a major tribute of Kama River and one of the most beautiful rivers of the Urals. 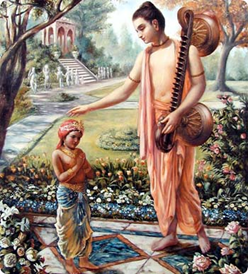 The distance between the source of Vishera River and the mount Narodnaya / river Narada is about 400 km.  See Narada and the Urals.

In his mother’s womb, Prahlada began to learn from Narada.  He was taught by Narada in early childhood and developed an intense love for Vishnu.  Narada gave spiritual initiation to Prahlada.  Later Prahlada became the mighty king of the Asuras beloved and respected by his subjects.  He was able to fight against the gods such as Indra, Shiva as well as Nara-Narayana and Ravana, etc.  See Russian rivers Indrus, Siva, Nara, Ravan.

Prahlada’s clan was the children of an earth goddess Diti and the sage Kashyapa.  Among the notable members of this clan was Holika, aunt of Prahlada.  She was daughter of Kashyapa and Diti and had a special boon that fire could not harm her.  As a young boy Prahlada was tricked to sit on her lap on a bonfire.  Prahlada prayed.  Eventually, Holika was burnt to death, while Prahlada was kept safe from the flames and came out unharmed.  Her death signifies the triumph of good over evil.  This story is celebrated in the main Hindu festival of Holi. 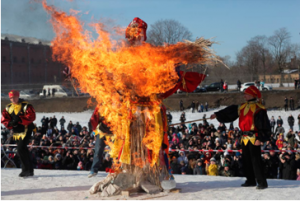 Holi is the Hindu spring festival that has a sticking similarity with Russian festival Maslenitsa, also known as Butter Week.  It is one of the oldest surviving Slavic carnivals, celebrating of the imminent end of the winter.  The last day is called Sunday of Forgiveness.  Relatives and friends ask each other for forgiveness.  As the culmination of the celebration people gather to burn Lady Maslenitsa in a bonfire.

Prahlada was saved by Narasimha, the fourth avatar of Vishnu, who incarnated in the form of part lion and part man.  In Sanskrit, ‘nar’ means Man and ‘simaha’ is lion.  Such half man and half lion is depicted on the coat of arm of Russian city Vladimir.  Vladimir region has number of rivers with Sanskrit names, for instance, Agra, Tara, Yada, Vamanka, etc.  As a matter of fact, Vamana was the fifth avatar of Vishnu.  Vamana incarnated as a dwarf who defeated the powerful king Bali who was Prahlada’s grandson.