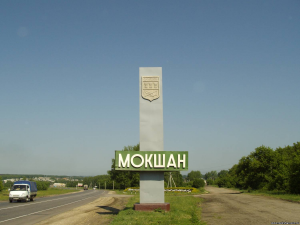 Moksha is the name of a river in Central Russia.  Its source is around 530 km. south-east of Moscow, near town Mokshan.  The Moksha River (~ 650 km.) is a tributary of the Oka River.  See Oka & Gujarat.

The Moksha River flows into the Oka River some 300 km. south-east of Moscow.  Moscow is located on the banks of the Moskva River given its name to the Russian Capital.  Russian name Moskva is close to the Sanskrit word Moksa, meaning liberation, salvation or emancipation of soul.  See Sanskrit names in Moscow region.

Sanaksar monastery is located on the Moksha River.  Its name is close to Sanskrit word Saṃsara meaning world and circuitous change, etc.  Samsara is a religious concept of reincarnation in Hinduism and other Indian religions, such as Buddhism and Jainism.  The liberation from Samsara is called Moksha as the river where Sanaksar Monastery is located (or vice verse).  Presumably, not by chance look similar the Samsara wheel, the Dharma wheel and ship steering wheel…

Sanaksar monastery is the home of the relics of Fyodor Ushakov (1745 – 1817) who is Russia’s most famous admiral and holy (righteous) warrior.  He was invincible in sea battles.  Of the 43 sea battles he commanded, he did not lose a single one.  No Russian ship under his command was lost, no sailor was captured by the enemy.  Admiral Ushakov was the absolute winner of all sea battles.

His first name Fedor given upon birth is a male Russian personal name of Greek origin meaning ‘Granted by God, ‘God’s gift’.  Interestingly but admiral Fedor Ushakov was the creator of an independent Greek Republic.

There was a saying ‘where the Ushakov, there is a victory’.  But first he defeated himself, his human weaknesses, becoming kind and honest, brave and modest, merciful to his enemies, etc.  He completely abandoned his personal interests, devoting his life to his country.  Admiral Ushakov was canonized by the Russian Orthodox Church in 2001.  His memory day is August 5th.  It is the day when were finished the two major battles — Battle of Kursk and Kurukshetra.

The Moksha itself has many tributaries whose names could be translated from Sanskrit.  For instance, the river Sukhoi Urey.  In Sanskrit, sukha means delight, joy, etc.  Well known in Buddhism is Sukhavati or the Western Paradise.  Urey is the ancient Egyptian symbol of royalty, power of life and death, the ability to edit and destroy the enemies of the god Ra.  Ra is the ancient name of the above mentioned river Volga.  Urey was a sacred snake (cobra) forehead worn by the pharaoh on his crown or diadem.  In Indian mythology Lord Vishnu rests on a thousand-headed snake Shesha who is one of the primal beings of creation and king of all nagas.  Naga or cobra is a symbol of Kundalini power or special cosmic energy within man.

The Shoksha River is another tributary of the Moksha River.  Shesha’s younger brother Vasuki loosens Mount Mandara, to enable it to be used in the churning of the ocean by the devas and asuras.  See village Osurovo in the above mentioned Yaroslavl region.  Lakshmana is considered avatara of Shesha.  Lakshmana is the younger brother of epic hero Rama who is an avatar of Lord Vishnu.  The river Lashma is a tributary of the Moksha River.

The Varma River is also tributary of the Moksha River.  Ravi Varma is one of the greatest painters in the history of Indian art.  He is particularly noted for his paintings depicting episodes from the Mahabharata, the Ramayana and the Puranas. 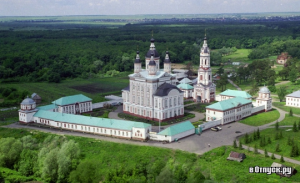 The Scanov monastery is located a few kilometers from the above mentioned Moksha River.  It was founded in the 17th century.  After 1917 the monastery was closed by the Soviet power like the other ones countrywide.  In 1985 the buildings of Scanov monastery were transferred back to the Russian Orthodox Church.  The first renewed service was held in 1990 on April 12 that is Cosmonautics Day in Russia.  In 1961, April 12th, the Soviet cosmonaut Yuri Gagarin became the first human to travel into Cosmos.  He performed the first manned orbital flight around the Earth and landed near Samara.  See above for Samsara wheel, etc.

The exact origin of the monastery’s name is unknown.  Its archive was burned down during a fire in the middle of the 17th century.  In the «History of the Russian Church hierarchy» it is said that the name of the Scanov monastery has come from the river Skanova.  On the other hand, Skanda is a Hindu god whereas region Scania has given its name to whole Scandinavia.  See Odin & Scanda.